Posted at 08:53h in Latest News, Special Dates by julia

Holy Week (locally known as Semana Santa), Easter is probably the most important celebration in Spain and stands out for its epic brotherhoods’ processions and an ancient traditions specific to each region. There are many different ways to experience Eater in Spain. We are sharing some traditions and customs with you so you know what to expect and attend if you ever take a trip to Spain this time of year.

The atmosphere that characterizes the festivities is usually solemn and quite spectacular.  Everything seems fully immersed in passion and emotion.

Although each Spanish region has its own customs and practices, Semana Santa celebrations are nowhere else as elaborate and spectacular as they are in Andalusia. Here, this important Catholic holiday is commemorated with a week full of color, art, religious fervor, and extraordinary processions. The festivities start on Palm Sunday (Domingo de Ramos) and last until Easter Monday (Lunes de Pascua), with the most dramatic and passionate parades held on Maundy Thursday and Good Friday.

The most spectacular events take place in Malaga and Seville, where the streets are taken over by flamboyant parades (or pasos as we call it in Spain) displaying biblical scenes. A paso is an enormous float adorned with life-size wooden statues of biblical characters. In Seville, they are considered genuine artistic masterpieces, some of them dating back as far as the 16th century. Each movable float belongs to a brotherhood, or cofradia (there are over 50 in Seville), and has its own distinctive decoration, colours and identity. A common feature, however, is the team of costaleros who convey the pasos on their necks or shoulders through the crowded streets.

One of the highlights of the Holy Week in Seville is the night of Maundy Thursday, known as La Madrugá, commemorating the trial, the crucifixion and death of Jesus Christ.

As gastronomy is also an important part of our culture, during Easter time we taste some of the most traditional sweets and cakes which are quite common all over Spain. Local restaurants and cake shops serve and sell these delicatessen: 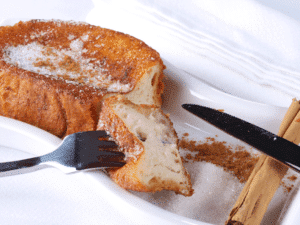