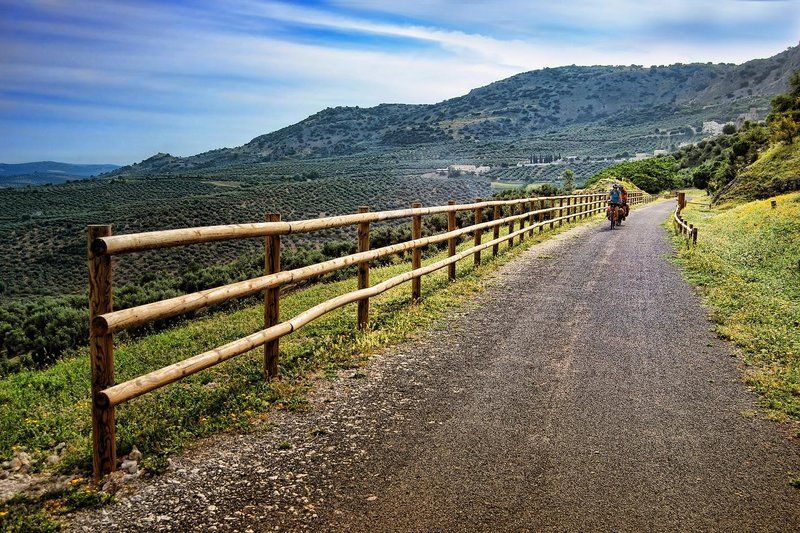 Posted at 17:52h in Experiences, Latest News by Rosa

Spain has a long history of reusing, repurposing and building upon the old to create something entirely new. A recent example of this wonderful practice are the Via Verdes or Greenways of Spain. The Via Verdes came about thanks to a program that was launched in 1993 by the Foundation of the Spanish Railways and modelled on the UK’s and the US’s Greenways program. The idea was to introduce sustainable tourism practices to rural areas by taking advantage of existing unused railway tracks, originally built to connect the smallest villages of the country, and to turn them into traffic-free cycling and walking paths.

The result? These tracks, which had fallen into disuse after the Civil War and lay forgotten for decades while the surrounding countryside slowly reclaimed them, are now incredible Via Verdes that pass through areas of spectacular and breathtaking natural beauty.

Today, there are over 100 routes nationwide (about 2,100 km) that have been converted into Vías Verdes. These routes have been wonderfully refurbished, complete with kilometer markers, various viewpoints or “miradores”, and picnic areas. Adding to the charm of these Greenways, many of the original engineering features were preserved, including bridges, viaducts, tunnels and stations, some of which have been converted into cafes, restaurants, museums or rural hotels that hire out bikes.

Hiking or cycling one of Spain’s Greenways is a unique experience which we highly recommend during your stay. Here you have our 6 favourite routes. If you’d like to incorporate any of these routes into your tailor-made itinerary, we will gladly take care all of the arrangements including bike rentals and private transfer to and from any of these locations for a hassle-free day outdoors:

Considered Andalusia’s finest greenway by many, it was originally built with the intent to link the cities of Jerez de la Frontera with Almargen but was never completed. The current route passes through the old Jerez-Almargen railway line, connecting the towns of Puerto Serrano and Olvera. The trail goes through a great variety of landscapes, from a largely agricultural fields to rocky and mountainous scenes. The trail also goes along the rivers Guadalete and Guadalporcún and includes four spectacular viaducts, 30 tunnels and three stations turned hotel-restaurants. A must-see: the Puerto Serrano, Coripe and Olvera train stations which were neglected for many years until their recent renovation that turned them into unique restaurants and tourist accommodations.

This route is one of the most popular of Andalusia’s vías verdes and was the railway line that connected the Zafra-Seville line with the Cerro del Hierro line and which transported mined minerals. Today, its nearly 20km have been repurposed into a beautiful greenway which follows the Rivera del Huéznar river that spills into the natural monument of the Cascadas del Huéznar waterfalls. Further along, a true Mediterranean forest welcomes us around San Nicolás del Puerto. At the end of the route we’re greeted by another Natural Monument, the Cerro del Hierro or “iron hill” which offer a spectacular landscape of unique shapes and colors. These iron-rich hills were mined for centuries; from Roman times up until the last century. This human activity on these limestone rocks, in addition the natural erosion from rainwater and snow, has produced a really beautiful rock formations making a walk or ride through them a real treat!

This is the longest route in Andalusia. Its name, “Tren del Aceite” or oil train, comes from the fact that it runs along the old train tracks that were used to transport olive oil from Jaén and Córdoba to the port of Málaga. This route was in use from 1893 up until 1985 when road transport network took over. Fifteen years later, the Jaén portion was converted into a magnificent Greenway by the Ministry of the Environment and the Córdoba province section, which passes through The Sierras Subbéticas Natural Park, followed shortly after. This route, which is great for both cycling or hiking, snakes and winds its way through rolling hills of farmland and what seems like an endless sea of olive trees dotted with typical Andalusian farmhouses. On the way, you’ll come across impressive metal viaducts from the end of the 19th century as well as quaint rest areas and charming white towns such as Zuheros.

We invite you to take a look at our Self-drive Tour of Andalucia as any of the above 3 routes can be easily included on that itinerary if you fancy enjoying some exercise outdoors while your are exploring Southern Spain.

We head north to the beautiful region of Girona (Catalonia) to explore the Greenway of Carrilet. Similarly to the Via Verde del Aceite in Andalusia, this Catalonian route is broken down into two sections. The first portion (54km) joins Olot and Girona and offers incredible views of La Garrotxa Volcanic zone Natural Park. The second portion (39 km) has fantastic views of the coast since it skips Girona entirely and ends in Sant Feliu de Guíxols.

This greenway which goes along the Cidacos River and connects the towns of Calahorra and Arnedillo, is a true gem. The Cidacos River is a small tributary that, from the slopes of the Cameros and Préjano mountain ranges, flows down into a fertile valley. Market gardens and a thriving industrial sector made possible the movement of a small narrow-gauge railway. Its layout, now that the train is out of service, brings us today closer to the Jurassic dinosaurs that once walked through  this area. It wasn’t until 1998, that the Ministry of the Environment and the Regional Government of La Rioja refurbished the forgotten railway into the fabulous cycling and hiking-friendly Greenway we can enjoy today!

Moving away from the mainland, we turn our attention to the Manacor-Artà Greenway located on the beautiful Balearic Island of Mallorca and which follows the path of the railway that used to serve its easternmost regions. This is an easy and safe trail that runs through the interior of the island where traditional crop fields alternate with Mediterranean forests on the hills that the old railway line used to skirt around in its quest for a flatter route to follow. On this route, you’ll pass by the old stations of Sant Llorenç des Cardassar, Son Carrió and Son Servera, charming rural towns and villages offering a rich and varied gastronomy and attractive cultural heritage. Although the original route was not destined to end at the beach, it is possible to detour halfway (in Son Servera) to take a dip and enjoy the coves that Mallorca is known for.